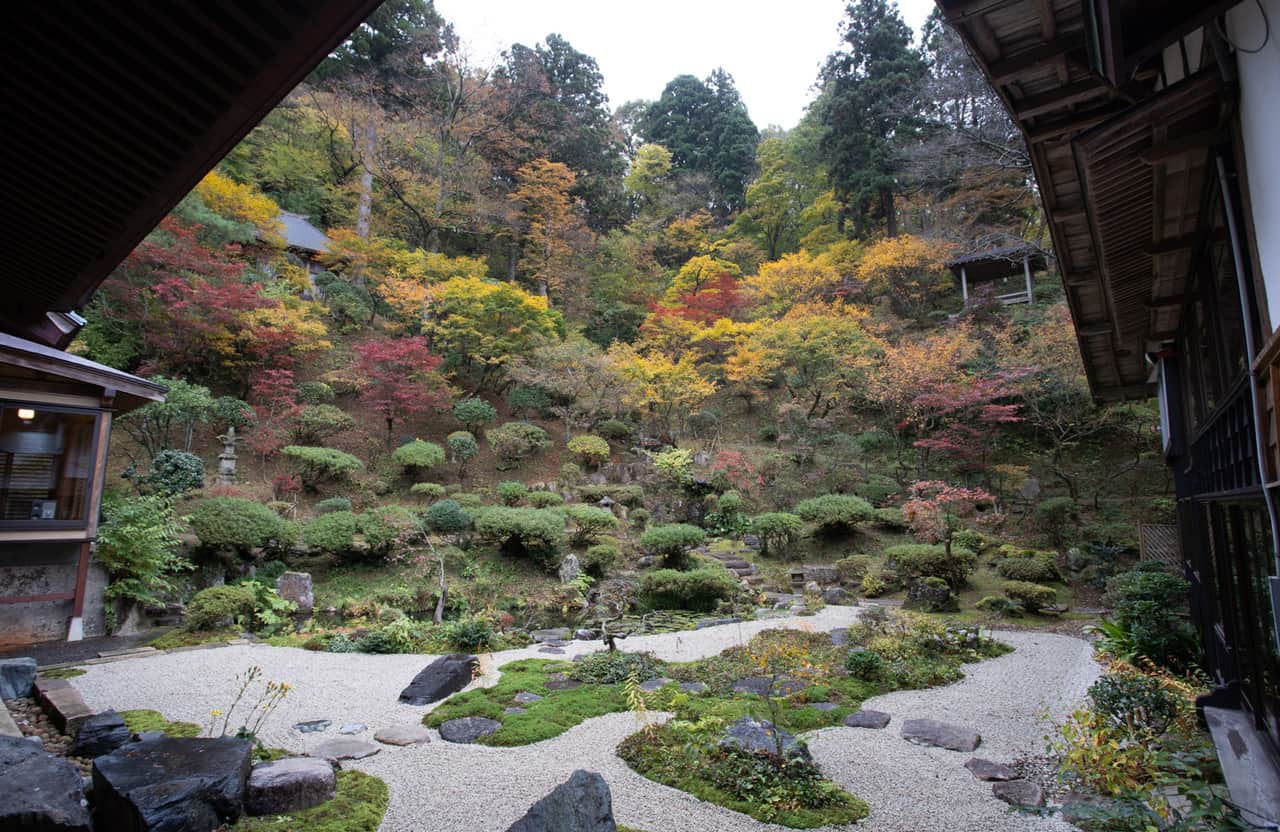 Located along the Sea of Japan about 4 hours from Tokyo is the small coastal city of Murakami. Rich in cultural arts, cuisine, and history this city is a perfect place for those looking to get off the beaten path and see a side of Japan that has managed to stay off the radar of most travelers.

I set off for a two-day trip here to explore the sights and history of Murakami in early November and was just in time for the wonderful Autumn colors. The first place on my list was Fusai-ji Temple, a Buddhist temple with over 500 years of history along the mountains on the outskirts of Murakami City. Here, I had a lunch appointment booked for this temple’s shojin ryori, traditional Buddhist cuisine made by the monks of Fusai-ji.

Shojin ryori has many strict rules that it must follow, the most notable of which is that the cuisine is vegetarian, but it is also not supposed to include ingredients that can be classified as pungent, like onions or garlic. What you are left with are pure, clear flavors made with seasonal and fresh ingredients that are believed to be not only healthy for your body, but for your soul as well.

I myself am not a vegetarian and meals usually do not feel complete for me unless they have some sort of meat in it. The shojin ryori, however, was very enjoyable for me and I loved the incredible diversity of flavor combinations and textures in this multiple course meal that had over 10 different dishes. I especially liked the black sesame tofu and chrysanthemum petals marinated in vinegar. If I could eat this sort of cuisine every day, then I certainly wouldn’t mind giving up meat.

A note for vegans: Be aware that some temples include dashi derived from bonito (fish) flakes in some of their dishes.

Following lunch, I proceeded up to the second floor of the temple near the Japanese garden to a tearoom where I took part in a tea ceremony with some of the locals from Murakami. This included matcha tea with wagashi sugar sweets pressed into the form of ginkgo leaves to match the Fall season. The tea room had an open view of the Japanese garden, and the woman leading the ceremony was so kind as to walk me through each step of the ceremony upon realizing that I was not familiar with it.

The garden of Fusai-ji is built into the mountain and was in full fall colors during my visit. It made for a beautiful centerpiece to the temple that could be seen from almost every room in the building. It even had a waterfall near the back of the garden and I was told many of the trees are also sakura trees. I would love to come back to visit in April to see it during the Spring.

It just so happened that on the day of my visit there was a craft fair taking place at the temple where local artisans from Murakami City gathered to set up shops in the halls and rooms of the temple. I was particularly interested in an antique shop that had a wide selection of Murakami’s cultural arts on display. Here I picked up an exquisite summer teacup that had deep blue colors and the mark of the artisan who crafted it at its base. The cup resembles a shallow bowl so that the tea can cool faster in the warm summer months.

There was also a crafts shop here with dolls and ornaments made from kimono fabric made by friendly craftswomen. Meeting locals is always one of the best parts about travel for me and I very much enjoyed meeting the laid back and friendly people of Murakami.

For the next part of my day, I visited the remains of Murakami Castle in the center of the city. This was the former site of the castle which once ruled over the Murakami Domain up until the Boshin War in the late 1800s. Although the castle no longer stands, you can still see its remains and a great view of Murakami and the surrounding area at the top.

The trail to the top of the mountain took about 20 minutes to climb and had well maintained concrete steps for most of the way up. Despite being late Fall I was surprised to see that the forest on the mountain was still green. Nevertheless, it was still an enjoyable hike up.

As I neared the peak, I began to see some of the old foundations of this once mighty fortress. The stones here were originally set to be sold off for construction after the fall to the Meiji Government, but the descendants of the former Murakami domain petitioned to protect them. Murakami Castle is now protected as a National Historic Site of Japan.

The foundations of this castle were massive, and walking up to the top gave me an idea of just how heavily fortified this fortress once was. This region was the gateway into the northern Dewa Province which made it a critical foothold for the Meiji Government to advanced into the last region to stand against the Imperial Government. The stone foundations at the top of the mountain were about 2 stories tall and were still formidable to this day.

From the top of the mountain, I could see a view of Murakami City and the ocean that stretched out before it. On a clear day, you can also clearly see Awashima, a small island that is accessible from the port of Murakami.

As the sun began to set I returned back down the mountain towards my lodging for the night at a special guest house nestled in Murakami City. You can read about the next leg of my trip in Murakami here.

From Tokyo to Niigata, you can take the Joetsu Shinkansen. From Niigata, you can get to Murakami Station by the JR Uetsu Line. The total trip takes about 3 hours and 50 minutes. In these sections, you can use the JR Pass.

You can also find information on the region on the Murakami City Tourism Association.

If you want to know more about Murakami tea‘s culture, and castle town Murakami, visit these articles from our website.
Discovering Japanese Tea Culture in Murakami
Traditional Machiya Byobu Exhibition in Murakami