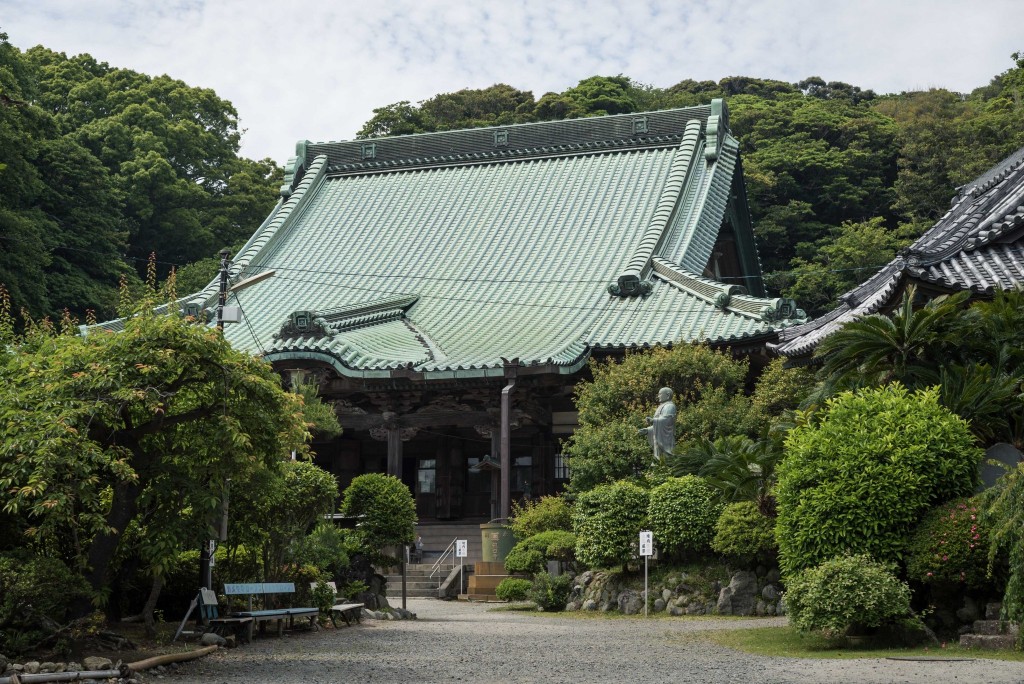 Discover Ryuko-ji Temple and a Five Storied Pagoda, near Kamakura

I guess many tourists think of Kamakura as a place of many temples and home to the Great Buddha Buddhist temple Kotoku-in), and Enoshima as a beach resort for the Tokyoites. However, Fujisawa city(Kanagawa prefecture) conceals a magnificent temple that unveils itself under further exploration!

A destination that cannot be missed, especially since it is only 23 minutes from Kamakura by the very cute Enoden Train. So why not explore Enoshima if you plan to visit Kamakura?

Enoden, the Charming Train which Connects Kamakura to Fujisawa (via Enoshima)

Enoden, or the Enoshima Electric Railway, runs through many stops from Kamakura to Fujisawa. The Kamakura – Enoshima train stations are very busy and pleasant to visit. You can visit them with a special ticket which costs only 260 yen for the Kamakura – Enoshima route. At Kamakura railway station, you will notice that there is a bakery / sandwich shop called “DéliFrance” … Think about trying it if you are craving a quiche or croissant!

Take the Enoden, this little train of four vehicles can take you to Enoshima station in 23 minutes, to enjoy an impressive and unforgettable experience! As the train is running, you will run on narrow railway tracks among the houses. It’s as if you were walking in the middle of rural Japan! Once the narrow road is over, then you can even admire the ocean from your seat!

And yes, Enoden can even be spotted in some films thanks to the “retro” look!

Taking the Enoden makes you feel as if you have stepped into a different time … The train journey via the Enoden(nose pressed against the window) is something I recommend to try at least once during your trip to Japan … and even more than once if you have the opportunity!

After arriving at Enoshima, take a few minutes to go to the little Japanese sweet shop, Ougi-ya, which is right in front of Ryuko-ji temple. Both are close to the station, so it would be nice to stop by the shop to sample some sweets before heading up to the temple.

Take your time to admire the decor of this shop! After waiting a few minutes and observing the street, you might see the “real” Enoden passing between Ryuko-ji temple and the shop Ougi-ya … It was very surprising when we saw it, so you may feel like enjoying the view too!

After the Ougi-ya shop, cross the street to visit the temple. Take all the time you need to enjoy this temple thoroughly. Follow the path from top to bottom, climb all the stairs (it’s worth the detour, I promise)!

Indeed, little wonders are hidden in every corner! The main hall named Dai Hondo in Japanese, built in 1832, and its five-storied pagoda, built in 1910, are the two highlights of this temple.

The History of Ryuko-ji Temple

According to legends, this temple stands on the site of the former Tatsukuchi Execution Grounds. Nichiren, the founder of the Nichiren Sect of Buddhism, was reportedly brought here for execution, having criticized Kamakura’s shogunate. But at the last fateful moment, a light came from Enoshima to dazzle the executioners and save the life of Nichiren! Nippo, a disciple of Nichiren, was created at the temple after his death many years later. In particular, he erected a statue of Nichiren to dedicate this sacred place to him, where the intervention of the light that saved Nichiren was considered a divine sign. The temple was founded in 1337.

When you go into the temple, you start by passing two gates (Nio-mon and San-mon) and then you face in the main hall, Dai Hondo. Then, to the right as you go up you can see the pagoda hidden among the trees so  try to get closer to it, so you will notice the dragon engraving to worth viewing as the beautiful work of art !

On the left, climbing up (very) steep stairs, you will find the impressive Bussha Ritou; a dazzling statue which came from India. The path is long, but after you arrive at the top, you will see the impressive statue. Also, from this point of view, you can admire a beautiful view of the Pacific Ocean and Enoshima island!

For more information, check out the official website of Fujisawa City Tourist Association in English !

You can also go directly to the tourist center, which is one minute away from Odakyu line Katase Enoshima station, it is open from 8:30 am to 5:00 pm and they will be happy to provide you with information and, if necessary, WiFi information!