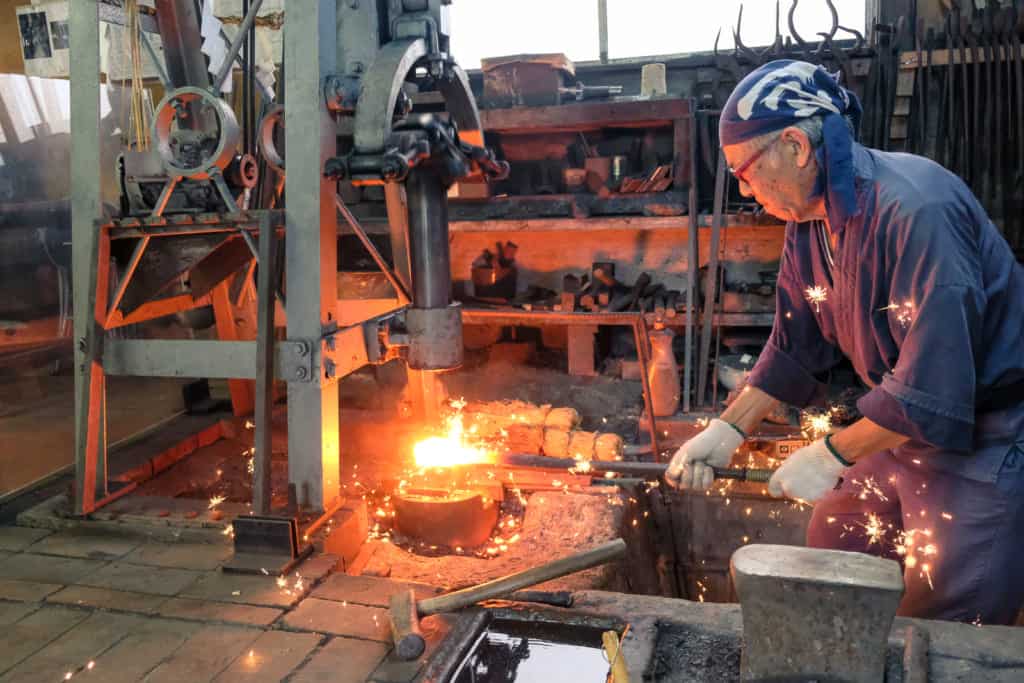 The Unbroken Tradition of Japanese Swords and Samurai Culture in Arao, Kyushu

“Strike while the iron’s hot.” I always knew what this meant, though never witnessed it in its complete, literal meaning. That is, until one stormy day, while the furnace roars and hammers clang, Mr. Matsunaga of Arao, Kumamoto leads us into the elusive world of katana sword making.

A Tradition Bound to the Samurai

It’s not every day that you get to see a Japanese katana swordsmith at work. In fact, never in a million years would I have thought that I would meet one, invited into his workshop, and be shown a glimpse into the centuries-old tradition of Japanese swordsmithing. As the craft advanced into this modern era, the world never forgot the swords’ intrinsic ties to the samurai who wielded them over a century and a half ago.

The Edo era of feudal rule in Japan between 1603 and 1868 saw the samurai class rise to power. With a law that effectively made the samurai the only members of society permitted to carry swords, the katana became the physical manifestation of samurai status. Though the 1868 Meiji Restoration brought the end to the feudal era and the samurai class with it, the practice of making katana swords survived, and still continues today.

Matsunaga Genrokuro of Arao, Kumamoto, has been practicing Japanese sword making for over 40 years. As a child, his interest in sword-wielding martial arts leads him into an interest in learning how to make the sword itself. After a 5 year training period and several tests to verify his ability, Mr. Matsunaga set off on his own to pursue the tradition of sword making over the next 41 years.

We meet Mr. Matsunaga at his home and workshop. Wearing a sandy blue work suit, he gestures us to follow him into his studio. There are a plethora of tools hanging on the walls, and swords in various stages of completion lying next to the forge. Picking up a shovel full of pine charcoal to feed into the fire, Mr. Matsunaga prepares to show us a process called folding, where iron is hammered, stretched, and folded, then forge-welded back into a single piece.

How to Make a Traditional Japanese Sword

It takes Mr. Matsunaga approximately two weeks to forge one sword. Once forged, the sword will be handed off to the next master craftsman for its next process. The making of the katana is a collaborative effort, taking 3 months in total to complete.

Mr. Matsunaga collects his own raw materials from the nearby Arao coastline in the form of iron sand. Armed with a large, cylindrical magnet, he rolls it on the ground to attract the magnetic fragments of iron in the sand.

He then takes it back to his studio where he smelts the iron sand with charcoal (effectively introducing carbon) in a process called tatara. (If you’re a Mononoke Hime fan as I am, you may recognize this term.) The final result is a sparkling chunk of iron called tamahagane.

Tamahagane is cut, stacked, and wrapped in Japanese washi paper before it is fired at a scorching 1,700 degrees C. About 9kg of tamahagane will be used for a single sword and will go through the rigorous folding process of hammering, stretching, and folding numerous times, then forge-welded back into a single piece. This repetitive process gets rid of impurities in the iron, and the finished product will weigh between 800g to 1,000g.

While we were chatting, the iron that Mr. Matsunaga had placed into the furnace has turned a fluorescent red. Years of experience tells him when it’s ready to be hammered, and he suggests that I prepare my camera as he switches on a large, mechanical hammer. Moments later, he pulls the iron out of the furnace and wastes no time moving it under the hammer’s pounding force. As I fumble with my camera to get a shot of the fireworks, the saying, “Strike when the iron’s hot” floats into my head. As a brilliant display of sparks leap and bounce every which way, the saying becomes action.

Eventually, Mr. Matsunaga will move onto the next step called sunobe firing, where the iron gets stretched out into the form of a sword. It’s worth mentioning that this is not using the same piece of iron we were watching him hammer earlier. It would be impossible to demonstrate more than one stage in one visit on one piece of iron. Luckily for us, Mr. Matsunaga has several swords in different stages of manufacture, and is able to show us more than one process.

During our visit, and I hope in yours, we got the chance to try our hand at forging. My partner gladly took my place as my subject so I could continue to take pictures.

A Collection of Samurai Spirits

A visit to Mr. Matsunaga also includes a display of his impressive collection of antique swords, spears, and armor, as well as final commissioned pieces.

For anyone interested in commissioning a sword, you’ll have to make the trip down to Kyushu to meet the man himself. Mr. Matsunaga doesn’t accept commissions from just anybody. Deciding factors can include anything from a potential customer’s motives for owning a sword to the individual’s face-to-face interactions.

How to Get to Kumamoto

Kumamoto is easily accessible if you’re leaving from Hakata station, with express trains taking no more than 50 minutes to your destination. With a little bit of planning, you can get to Mr. Matsunaga’s workshop via public transit, though I’d recommend travelling by car.

Getting to Matsunaga Sword Tanrenjo

From Kumamoto station, take the Kagoshima Line headed towards Tosu, and get off at Arao station. Ask a station attendant for your best bus option, as there are several buses that will take you close to Matsunaga Sword Tenrenjo. Mr. Matsunaga’s workshop is located within a residential neighbourhood. Look for the sign that reads 松永日本刀剣鍛錬所, and continue to walk up until you see a blue painted Buddist temple at the top of the hill. Mr. Matsunaga’s residence will be to your right. From Fukuoka Airport: about an hour and 10 minutes by car. From Oita Airport: about 2 hours and 30 minutes by car. From Kumamoto Airport: about an hour by car