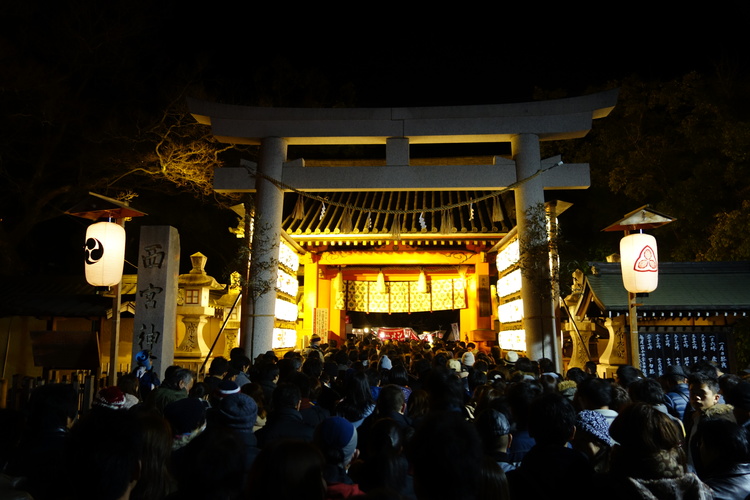 Catching a glimpse of the giant tuna at Touka-Ebisu Festival

Touka-Ebisu (十日えびす) is an annual festival that celebrates the New Year and Ebisu god at Nishinomiya Shrine (西宮神社) in Kobe. Though the name points to the date 10th (“十日”) and you may find that most of the activities take place on that day, Touka-Ebisu in fact encompasses three eventful days starting from January 9th. To believers, especially fishermen whom are said to be protected by Ebisu, as well as business owners and those who need a bit of extra luck for tests or exams, these three days are equally important.

The festival is said to be the biggest festival within the Hanshin area and attracts over a million attendees every year. Apart from the fact that Nishinomiya Shrine is the head shrine of the Ebisu sect (with about 3,500 Ebisu shrines spread across Japan), the “Lucky Men” (福男) race and the offering of a large tuna (大鮪奉納) also draws a fair amount of media attention each year. 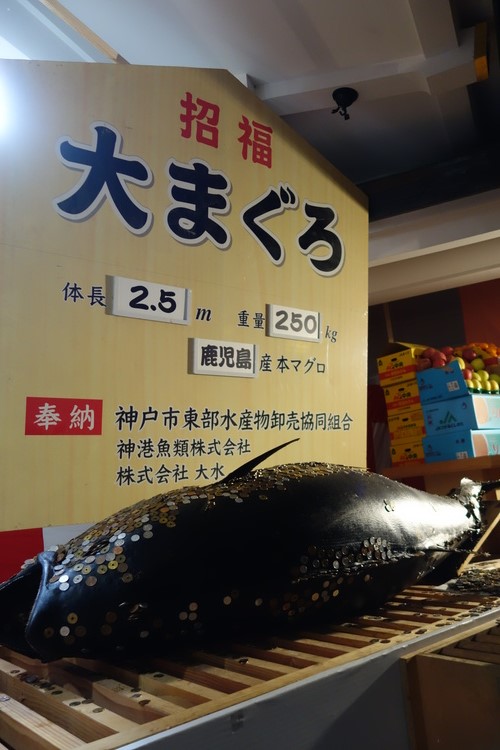 The tuna, which should weight about 300 kg and measures 3m long in average, by Kobe’s fishery wholesale associations, is prepared on January 8th kicks off the Touka-Ebisu. The next day the tuna will be transported to Nishinomiya Shrine and is placed inside the shrine as an offering during the festival. Sticking 5 or 10 yen coins to the body of the fish, as an offering to pray for good luck, has become a popular tradition among believers in recent years. 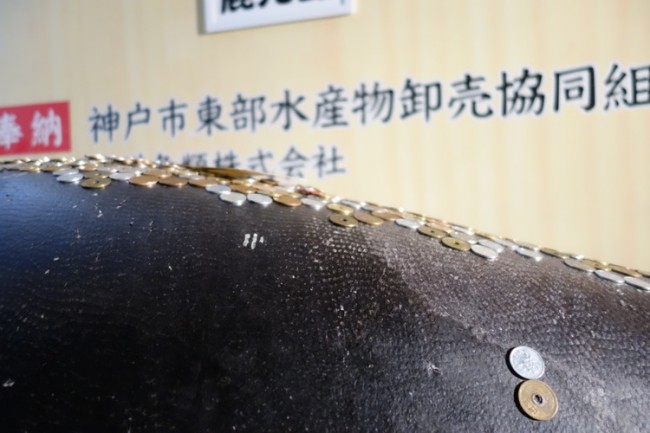 Geisha perform Kentoushiki (献湯式) in Arima Onsen (有馬温泉) in the afternoon of January 9th to pray for good business. Later that day, the blissed onsen water will be transferred to the shrine in a special container as an offering. Nishinomiya Shrine is completely closed late that day, a custom called Igomori (居籠り) passed down from the Muromachi period (14-16th century) that supposedly cleanses one’s mind before performing the rituals. This custom lasts until 16:00 on January 10th and during this time it is said that residents of the Nishinomiya area would traditionally stay home with all doors and windows closed so the Ebisu god could walk the streets.

When the shrine reopens it is time for the “Lucky Men” race, or officially the sacred selection of lucky men on Touka-Ebisu (十日戎開門神事福男選び). Once the Shinto rituals are inside the shrine are completed and its doors are reopened at 6:00, family members of these lucky men rush to the shrine, in an attempt to beat everyone else to be the first, hence the luckiest, to be blessed. 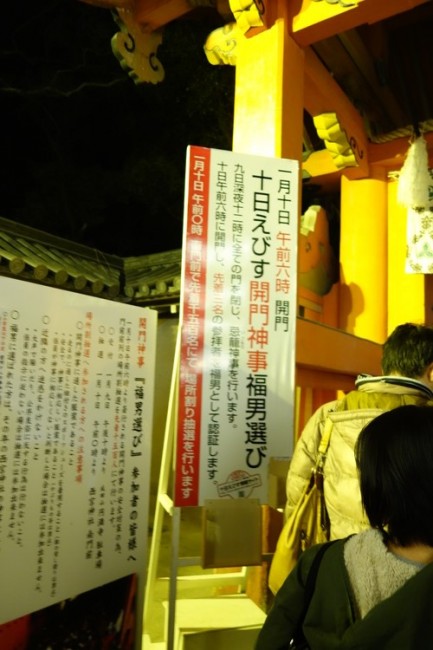 Today, the race is a 230 m run from the front gate to the main hall. The first three finishers, or the luckiest three, will receive prices such as certificates, Ebisu statues, rice and free alcohol (what else would be more appropriate than YEBISU beer?). As the climax of Touka-Ebisu it tends to attract thousands of lucky-men-wannabes every year. As much as I would love to join the good luck run, with people lining up way before 6am on the 10th I cannot honestly say that waiting in the cold on an early winter morning is my thing. Nonetheless, I did visit to Nishinomiya Shrine this year to return some charms, or omamori, from last year and to witness the fame of Touka-Ebisu in action. 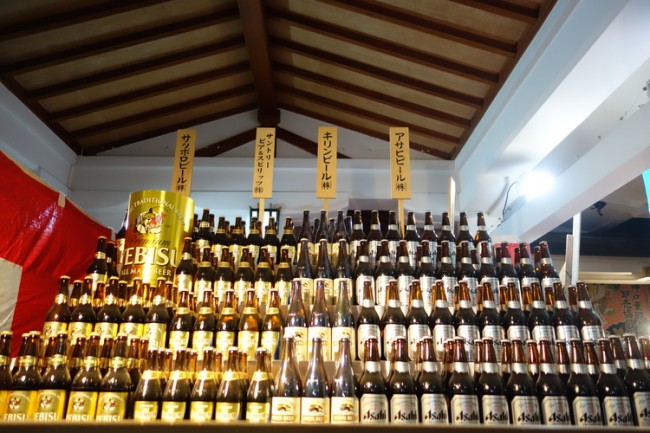 On the night of January 10, we arrived to the Nishinomiya station around 20:00. Although it was with some great difficulties we successfully manage to skip the street food stalls on both sides and made it to the shrine’s front entrance in about 10 minutes. People were already crowding before the front gate to wait to get in and optimistically I said “It’s probably just the entrance that is crowded”. 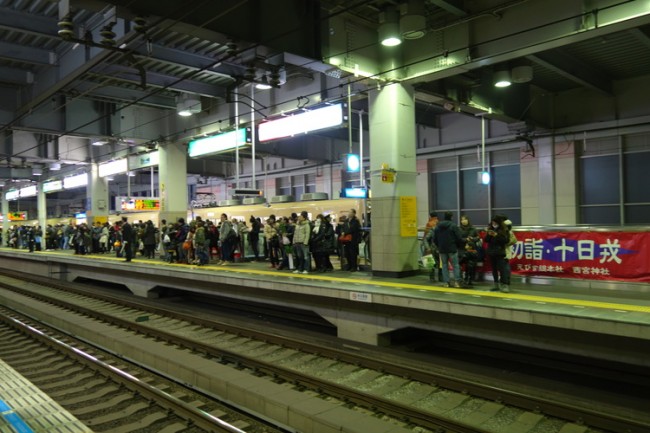 How wrong I was! The crowd, meaning the line, stretched all the way to the main hall, and it took an hour just to reach the sight of major parts of the shrine. 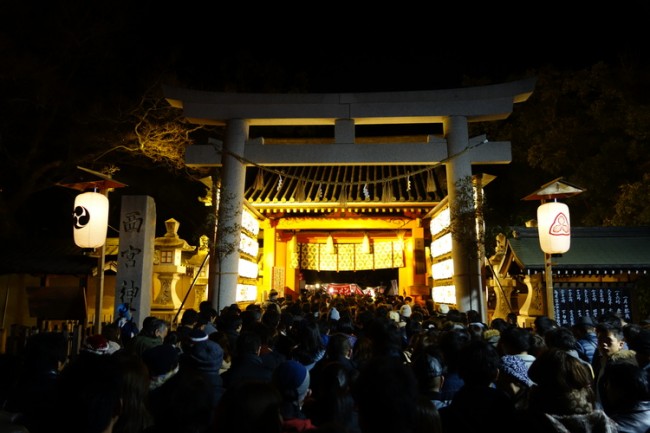 The charms I received from another Ebisu Shrine last year I was able to leave near the entrance, when I still had the energy, and prayed for another blissful year ahead. 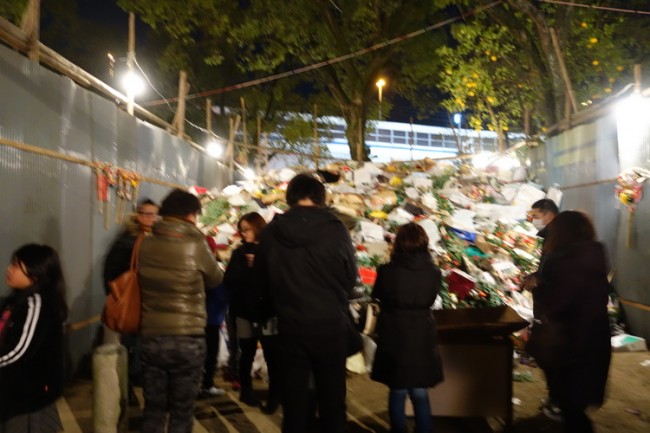 At the big tuna, the highlight of the event which we finally reached a stressful hour later, we only had one thing in mind finish praying quickly – but faithfully of course – and sit down for a nice and warm meal. Despite how starved we were, getting a fukuzasa (福笹) was not to be missed. A fukuzasa is a bloom-like lucky charm decorated with various Ebisu and good luck items such as red snapper (鯛). Originating from the Kansai area, the lucky charm is believed to bring good business and safety at home. 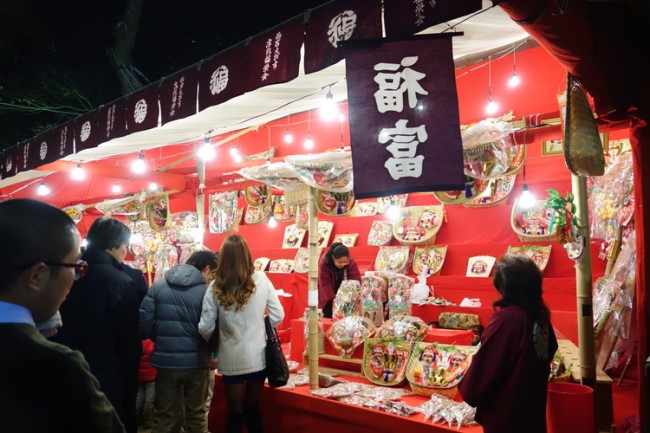 Touka-Ebisu is definitely worth visiting, but it may be wise to pick non-peak hours or a smaller Ebisu Shrine that is also hosting the festival, unless you are very determined to see the big tuna or even the Lucky Men race. Lining up in the cold for an hour however was no joke! 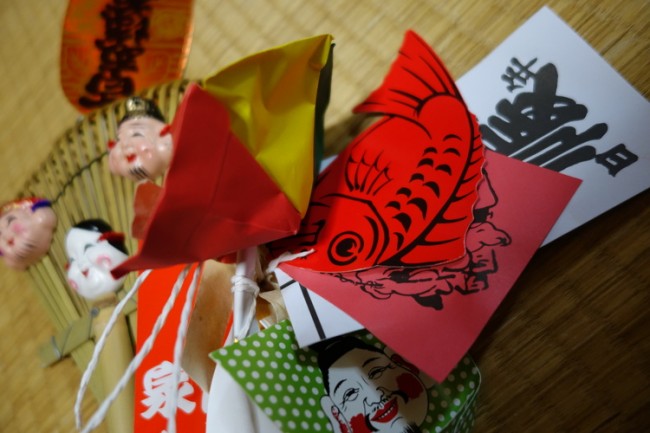