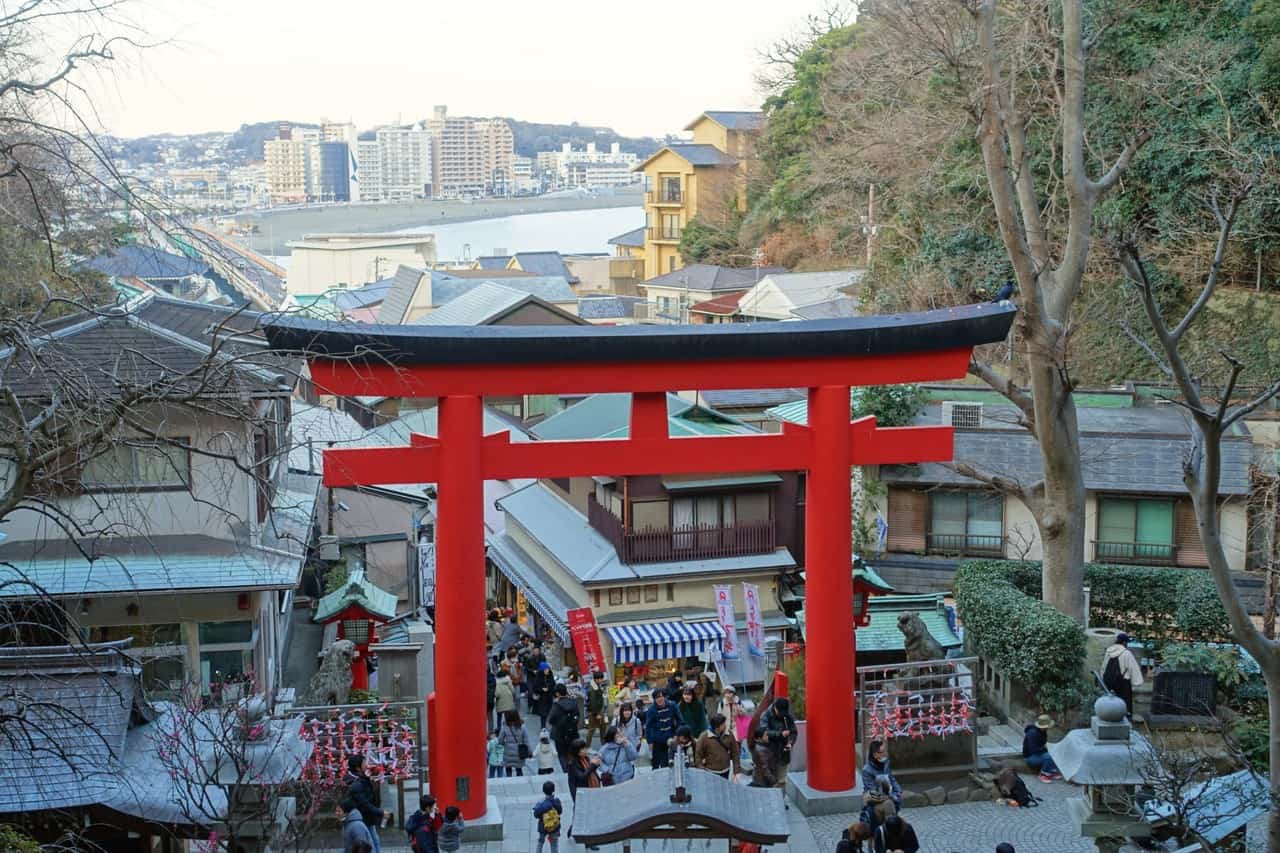 Enoshima Guide: A sacred island just one hour from Tokyo

I remember my first visit to Enoshima, relaxing on its expansive beaches while taking in a splendid view of Mount Fuji. Since then, this small island off the coast of Kanagawa has beckoned to me often with its peaceful beauty and has been my favorite day trip destination from Tokyo. Just an hour by train from Shinjuku Station, Enoshima is loved by everyone from culture aficionados to surfers to romantics seeking a perfect sunset. 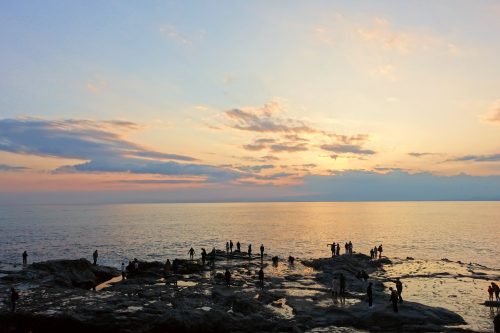 Reaching Enoshima couldn’t be easier on the Limited Express Romancecar train running on the Odakyu line. The train arrives at Katase-Enoshima Station from Shinjuku Station in about an hour. As you exit the station, take a few minutes to admire the building, adorned in bright colors (though as of this writing, it is currently undergoing renovation).

Strolling through the city of Fujisawa you will be enveloped by the seaside town atmosphere, where time no longer seems to matter and people’s faces relax into smiles. Across the Benten-bashi bridge you see Enoshima Island, just a ten minute scenic walk away, during which you might catch a glimpse of nearby Mount Fuji. 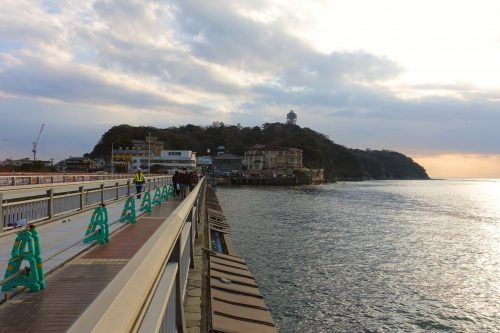 Reaching the island, you are greeted by an impressive bronze torii, your literal gateway to an oasis of Japanese cultural heritage. The original torii was made of wood, but recast in bronze in 1821 at the request of its patron, whose name is now engraved in it. It is designated as an important cultural property of the city of Fujisawa.

Passing through this symbolic entrance, you traverse the narrow shopping street Benzaiten Nakamise-dori. Though the shops have changed over the years, the atmosphere of the street itself remains as it has been for centuries. Shops, ryokan, and restaurants line the street, enticing visitors to try the local specialties like beautifully made biscuits, traditional cakes with sake, or the less traditional but very popular ice cream (soft cream). 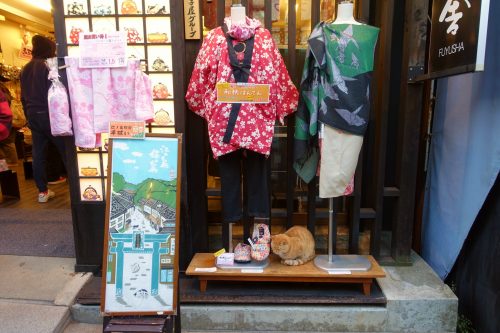 If Benzaiten is an affront to your senses, your next destination will give you a chance to catch your breath and restore tranquility. At the end of the street you reach Zuishin-mon, the gate to Enoshima-jinja Shrine. The shrine is a spiritual place founded in 552. Zuishin-mon means “blessed heart” and it has been said that only pilgrims with pure hearts could pass through it to enter the shrine. The shrine itself consists of three pavilions, each dedicated to a goddess of the sea. 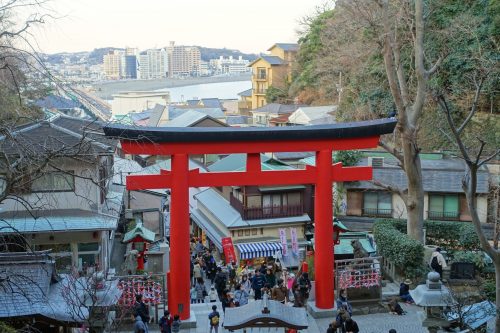 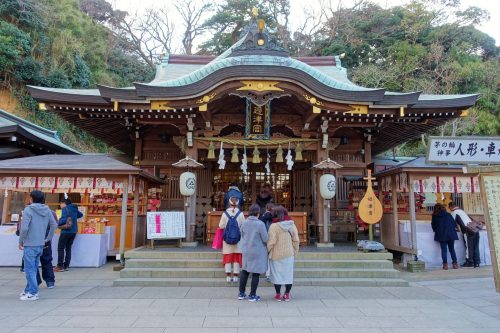 As you make your ascent, the streets become calmer, leading to the opposite side of the island where there are idyllic views of the sunset with Mount Fuji.

Chigogafuchi is my favorite spot to enjoy the sunset, and others agree as it is listed as one of the 50 most beautiful landscapes in Kanagawa. The rocky formations here blur the distinction between sea and shore, creating an amazing view. In the winter, plan to arrive before 17:00 (5:00pm) to enjoy the sunset experience. During this season, the clearer air maximizes your chances to enjoy a view of Mount Fuji. Let your senses be captivated by the sky lighting up with the warm colors of sunset, fading into softer hues before ending  with a touch of pink reflected in the puddles on the rocks below. Simply splendid. 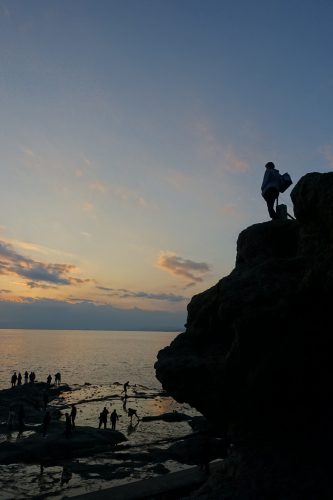 If you cannot or do not want to walk to the far side of the island, there are many other vista points that can be accessed easier which I will show on the map at the end of the article.

As night falls, the narrow streets of the island are illuminated by small lights, the crowd dissipates, and the atmosphere grows peaceful and warm. From the end of November to mid-February, thousands of tiny lights cover the streets, vegetation and even some of the buildings, marking the festival Shonan no Hiseki. Though I was jaded from the many “illumination” events in Tokyo,  I was truly amazed at the beauty the lights created here, especially in the Samuel Cocking Garden which is the main attraction of the festival.

For only 200 yen, you enter a wonderful world where nature interacts with technology to an incredible effect. The botanical garden is covered with different forms of lights, constantly changing in colors and movement. The garden is dominated by the Sea Candle Tower (an additional 300 yen to enter) which is the symbol of the island and lights up the night as a lighthouse. At 60 meters in height, there is an observatory with a 360-degree panoramic view. Lighting and soft music accompanies the different environments of the garden and it feels like being in a fairy garden. 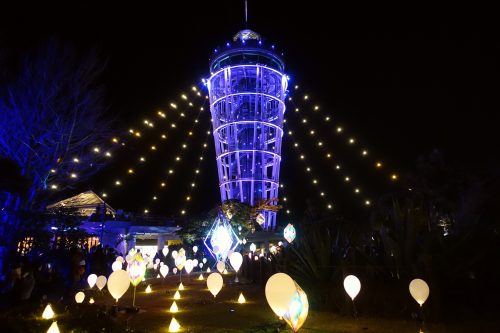 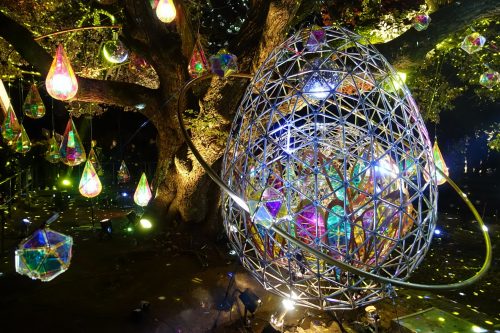 Leaving the island, we see the distant lights of the city, which almost feels like we are in Southern France. I keep returning to Enoshima to enjoy its relaxed atmosphere by the beach all year round.

An important train tip: there is an interesting train pass for one day, the Enoshima-Kamakura Freepass if you want to enjoy your trip from Kamakura, just 20 minutes from Enoshima. Another option would be a simple Enoshima 1-Day Passport(eno=pass), which includes a round trip ticket from Shinjuku to Fujisawa in one day as well as admission fees for four popular spots in Enoshima and valuable discounts at select shops, restaurants and other Enoshima attractions.