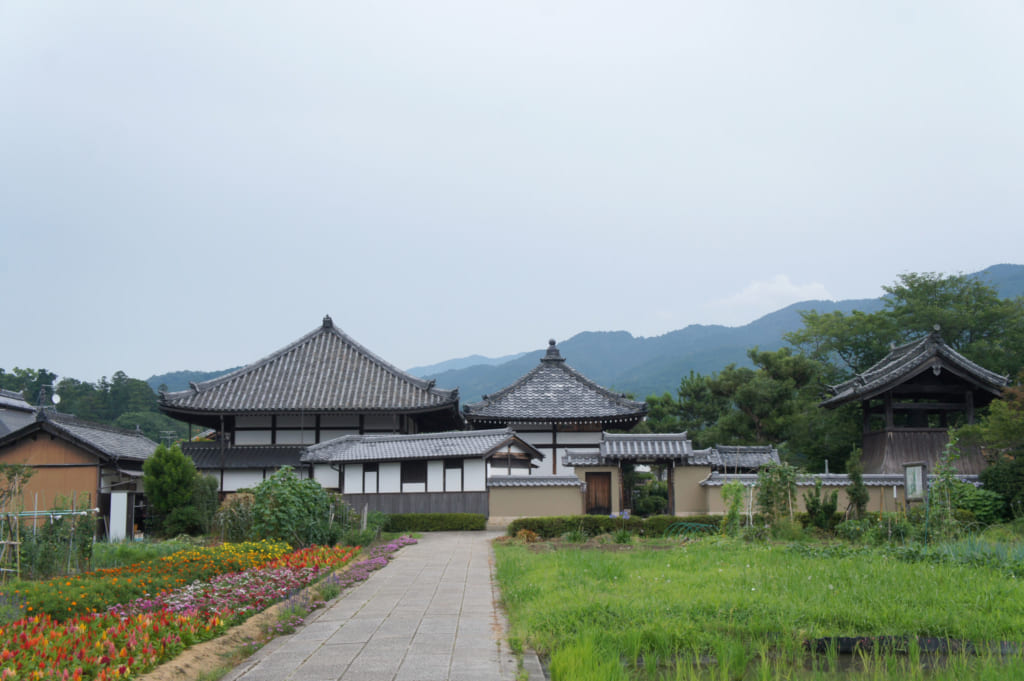 Reliving History in Asuka village, the birthplace of Japan

When we talk about Japan’s “old capital”, most people think of Kyoto. Well-studied people also know that before Kyoto, Nara was the capital of the archipelago from 710 to 784. But true Japanese history buffs know that even before that, more than 1400 years ago, the first Japanese capital was established about 30 kilometers south of Nara: in Asuka (飛鳥) – which had been the political and spiritual heart of Japan for several centuries.

Today, Asuka is a peaceful and picturesque village, but as you walk through it you will discover countless relics from the Asuka period. Archaeological sites, tumuli, temples and mysterious megaliths allow you to travel back in time and imagine what Asuka looked like long ago. 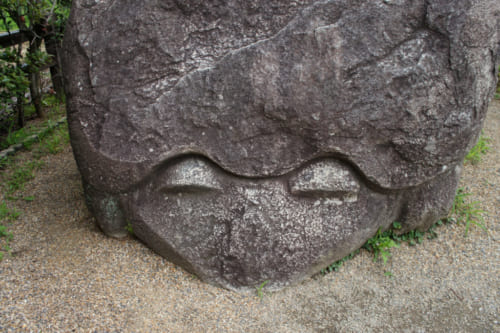 Kameishi: Asuka’s most famous megalith, carved in the shape of a turtle and whose origin remains mysterious

Archaeological sites from the Asuka Period

I hardly consider myself an expert on Japan’s history so I will avoid going into the complex details of this period. If there are a few things you need to know about the Asuka Period, they are these: the Asuka period was from 593 to 710; successive capitals were established during this era in Asuka and in the region around it. It is acknowledged that this period is the turning point when Japan as a nation was shaped through many reforms influenced by the Asian continent (China and Korea). During this period, Buddhism also flourished until it became the official religion of the court.

Among the palaces and other places of authority, only archaeological sites remain in Asuka today. Their locations have been restored or symbolically marked, which makes it possible to visualize their locations and sizes. In particular, we can visit the site of the Asuka Palace (Asuka no Kiyomihara), which stood here in the middle of the 7th century. 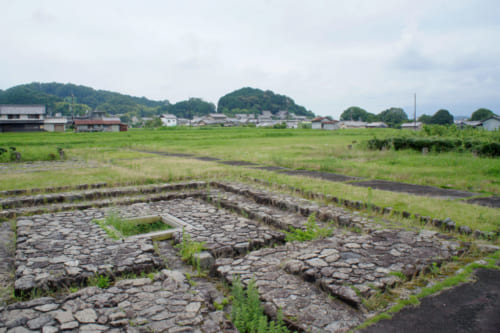 The archaeological site of Mizuochi-iseki is from the same period. This is the location of a monumental water clock, equipped with a bell to ring certain hours which symbolized the power of Emperor Saimei over time. This site was, like many others in Asuka, recently discovered in 1982. 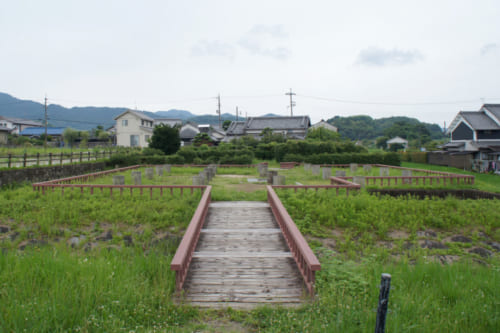 The many kofun of Asuka

The Asuka period followed the Kofun period (250-590). Kofun refers to the burial mounds erected in Japan during this pre-Buddhist period; one of which, Mozu-Furuichi in Osaka, was recently inscribed on UNESCO’s World Heritage List. There are many of them in Asuka. I had never visited one before and I was very surprised to discover how much these tumuli look like the Breton cairns. Megaliths are erected vertically to form a chamber covered with a large stone table, then the whole thing is covered with stones and earth.

The main kofu in Asuka is Takamatsuzuka. This kofun room is covered with coloured paintings that are reproduced in the adjoining museum. 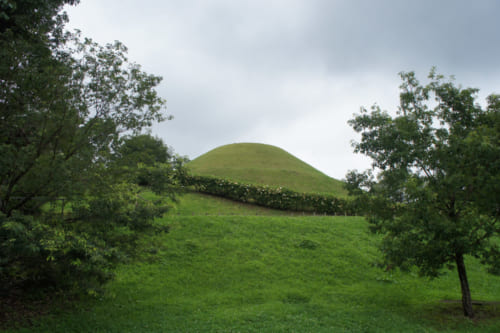 The Kitora kofun murals feature the oldest astronomical map in the world, with the representation of four deities in the form of animals and some signs of the Chinese zodiac. They are reproduced in the adjoining museum, where the original murals have also been moved to be preserved. They are only occasionally exhibited to preserve their condition, so consider yourself fortunate if you are able to view them on your visit. 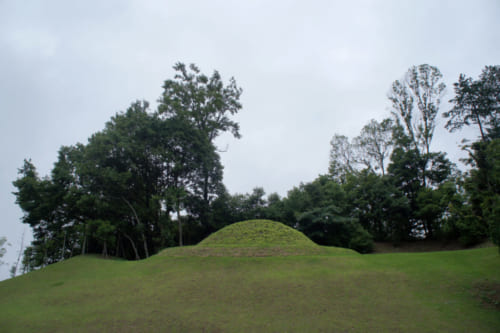 The most frequented tumulus of Asuka is probably that of Ishibutai. Unlike the others, the kofun chamber of Ishibutai is no longer covered so you can observe its megaliths and even enter the chamber. 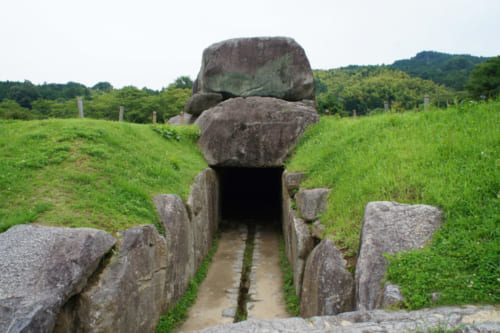 Asuka: Home to the oldest Buddhist temple in Japan

Buddhism thrived in Japan during the Asuka period. That is why the oldest temples of the archipelago have been built in this region. Unlike palaces, places of worship did not lose their function with the relocation of the capital, and some have stood the test of time. However, due to the many natural and manmade disasters in their history and the fragility of traditional wooden architecture, the buildings that can be seen today do not date from the Asuka period but most often from the Edo period.

Nevertheless, some artifacts that are made of more durable materials have survived through time. This is the case of the great Buddha, sculpted in bronze by Kuratsukuri no Tori at the very beginning of the 7th century. Considered the oldest in Japan, it is preserved in the first temple established in Japan: Asuka-dera. The current temple, located in the middle of rice fields, is charming. But the buildings from that time, located around a pagoda, used to occupy a larger area where many ancient treasures have been excavated. 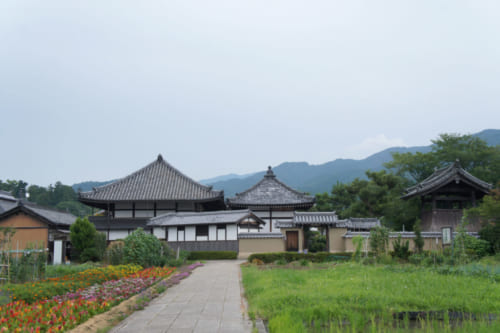 The current buildings of the Tachibana-dera temple date from the Edo era and overlook the terraced rice fields. According to legend, it was built at the beginning of the 7th century, on the site of the residence where Prince Shotoku was born, following the appearance of a miraculous apparition while the prince was reading Buddhist texts in front of Empress Suiko. 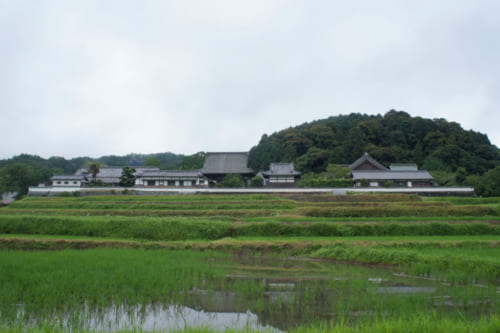 This temple contains a superb statue of Kannon from the Heian era (794- 1185), the oldest statue of Prince Shotoku, as well as one of his faithful horse. 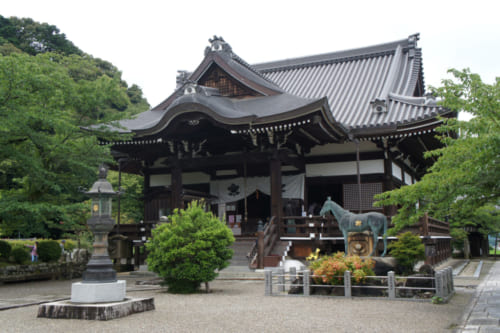 Another attraction of the temple is the ceiling of the Ojoin, on which you can admire paintings representing 260 species of flowers. 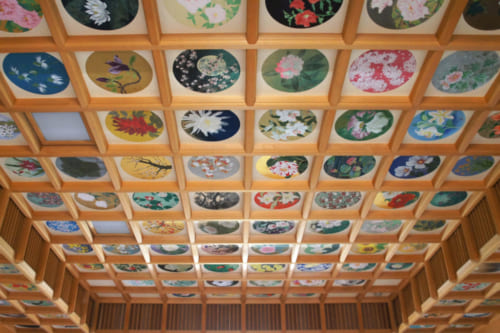 The Kawahara-dera temple was built in the middle of the 7th century by Emperor Tenji. Though the current temple has modest dimensions, one can see the location and size of the former buildings (the door, the pagoda, etc.) recreated on the ground of the vast land surrounding it. 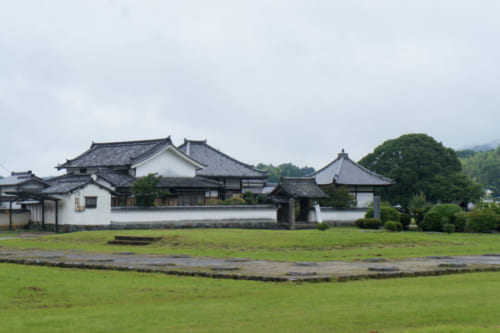 Kawahara-dera is considered to be the birthplace of shakyo (the copy of sutras) in Japan. Therefore the place is ideal to try the experience. The temple offers three lengths of text to copy (for 300, 500 or 1000¥). This being my first experience, I didn’t want to try the longest one. But because practicing shakyo is an activity similar to mediation, I chose the second one to have time to really immerse myself in copying. The characters are visible under a transparency, so it is not necessary to have a perfect command of Japanese writing to try them out. I really enjoyed this moment: taking the time to prepare the ink and then draw the characters required a lot of concentration and gave me a real feeling of inner calm. 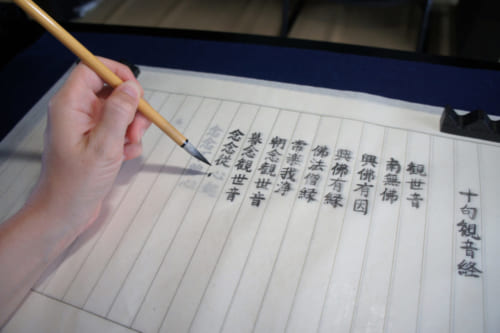 Interactive tools to understand the history of the Asuka period

It is not always easy to visualize Asuka when it used to be the capital of Japan simply by visiting its archaeological sites and temples on your own. But Virtual Asukakyo, an application for iPad, allows you to move around the sites while seeing a 3D reconstruction with explanations (available in English, Chinese and Korean) using augmented reality. You can also enjoy the experience with a virtual reality headset (information available from Asuka Historical National Government Park).

Additionally, an audio guide pen allows you to listen to information about the different Asuka sites by pointing at them on a map. This option is perfect for exploring the farthest corners of the village as explanations are not always available on site. 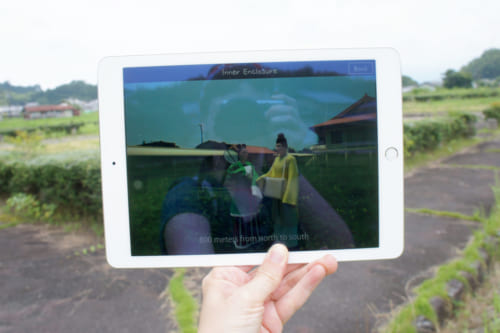 Finally, the surroundings of the Kitora kofun have been recently developed for visitors and offer many activities for those who travel with their families or who have a child’s soul and a passion for making things with their hands. 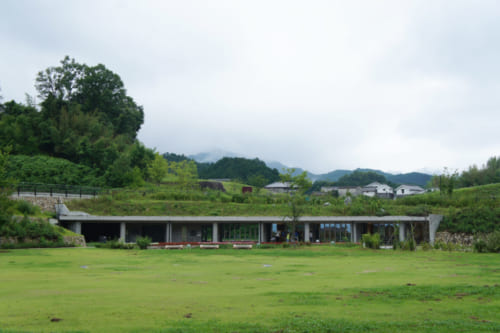 Every weekend and on public holidays, you can make glass balls, metal objects or magatama without reservations. These workshops are very affordable (300¥ for the magatama) and allow you to experience the craft techniques of the Asuka and kofun periods. 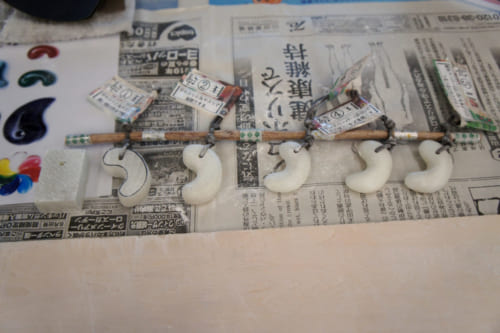 The steps of making a magatama

More information can be found on the Exploring Asuka website and on Asuka Navi (for a consultation in English on the phone). Download the brochure “Asuka, birthplace of Japan” available in pdf.

I also advise you to read the copy of the “naranara” guide dedicated to Asuka, you can easily find the paper version in Asuka but also download the pdf version (in English and Japanese).

In Asuka, it is most convenient to ride a bike or in a mini electric car called michimo (rental is available near the station). It is also possible to walk or use the Asuka Aka Kame bus (schedules and information here in Japanese) 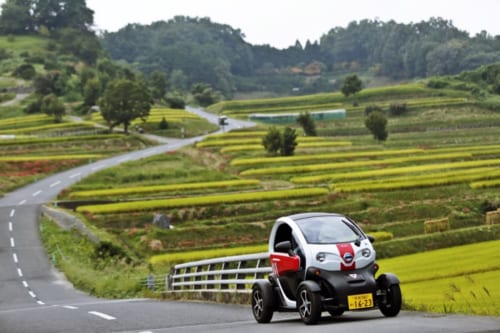