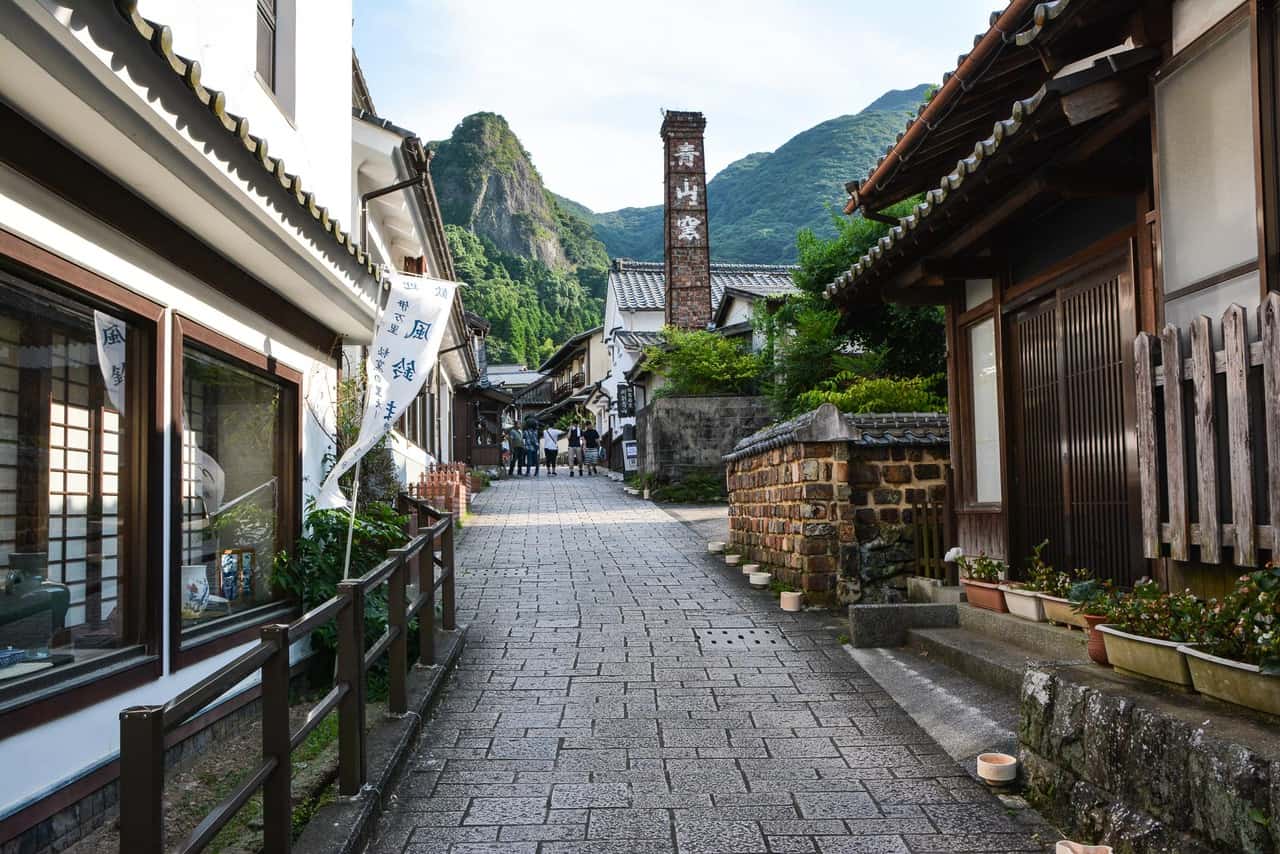 Saga prefecture in Kyushu is famous for its pottery. One of the best known is Imari-yaki in the Imari area. The Imari town and its village Okawachiyama are among the essential destinations to visit if you are in the region. Every year, a festival of wind bells is held during the summer in the village. All the locals hang these little porcelain objects in the narrow streets of the village.

The pottery of Imari is very distinct and unique compared to other pottery created in Japan. The drawings often have Chinese and Korean influences, of which the three main types are Koimari, Kakiemon and Nabeshima. Imari-yaki porcelain is also very expensive because of its historical significance and its pottery status both nationally and internationally.

Visit the Pottery Village of Okawachiyama

The village of Okawachiyama, easily accessible from Imari, is located in the hills, surrounded by beautiful lush mountains! The village is really pretty and has small alleys which allow visitors to walk along the beautiful canal and to discover the local pottery in the beautiful shops of the village, visitors can even see the ovens where the pottery is fired. The village is considered to be one of the cradles of Japanese pottery.

You will also see many beautiful brick chimneys, which are characteristic of pottery villages.

In the village of Okawachiyama almost everywhere you will find pottery objects: signs, decorative plates, porcelain decorating the bridge. It is quite a sight to see.

As you stroll around, you will see many traditional ovens.

Here I am in the village of Okawachiyama for this festival of wind bells (furin in japanese) which takes place every year from June 20th until the end of August. There are hundreds of little bells which are hung up all over the place in the village. Their sound is very beautiful and it is very relaxing to walk in the village of pottery while listening to the sweet tinkling of the bells! All of the bells are made of ceramic and have different designs!

These small bells have a history in Japanese daily life, especially during hot and humid summers. Before air conditioners, people tried by all means to feel less hot during the humid summers. When a little wind passed in front of the bells, the clear and soft sound gave the feeling of freshness.

I made it to the village in time for the lantern festival. During the evening, for the festival, they decorate the village streets, hanging lanterns on the buildings, in the central square, and even on the river bank. In total around 3000 lanterns are used in decoration! Unfortunately I had to leave before nightfall, but I was able to enjoy the festivities planned until around 4:30pm when I left. I still managed to see various concerts and other festive activities. To eat and enjoy local meals, just buy tokens (which are in Imari-Yaki !!!) and go to the outlets. Many people wore traditional clothes in the village, it was very beautiful to see people dressed in bright and colorful yukata!

Okawachiyama is therefore a village that is well worth visiting and not only for lovers of pottery and ceramics, but also for the beauty of the village which has kept its authentic and traditional character !!!

Information about the festival

Every year from June 20th to August 31st