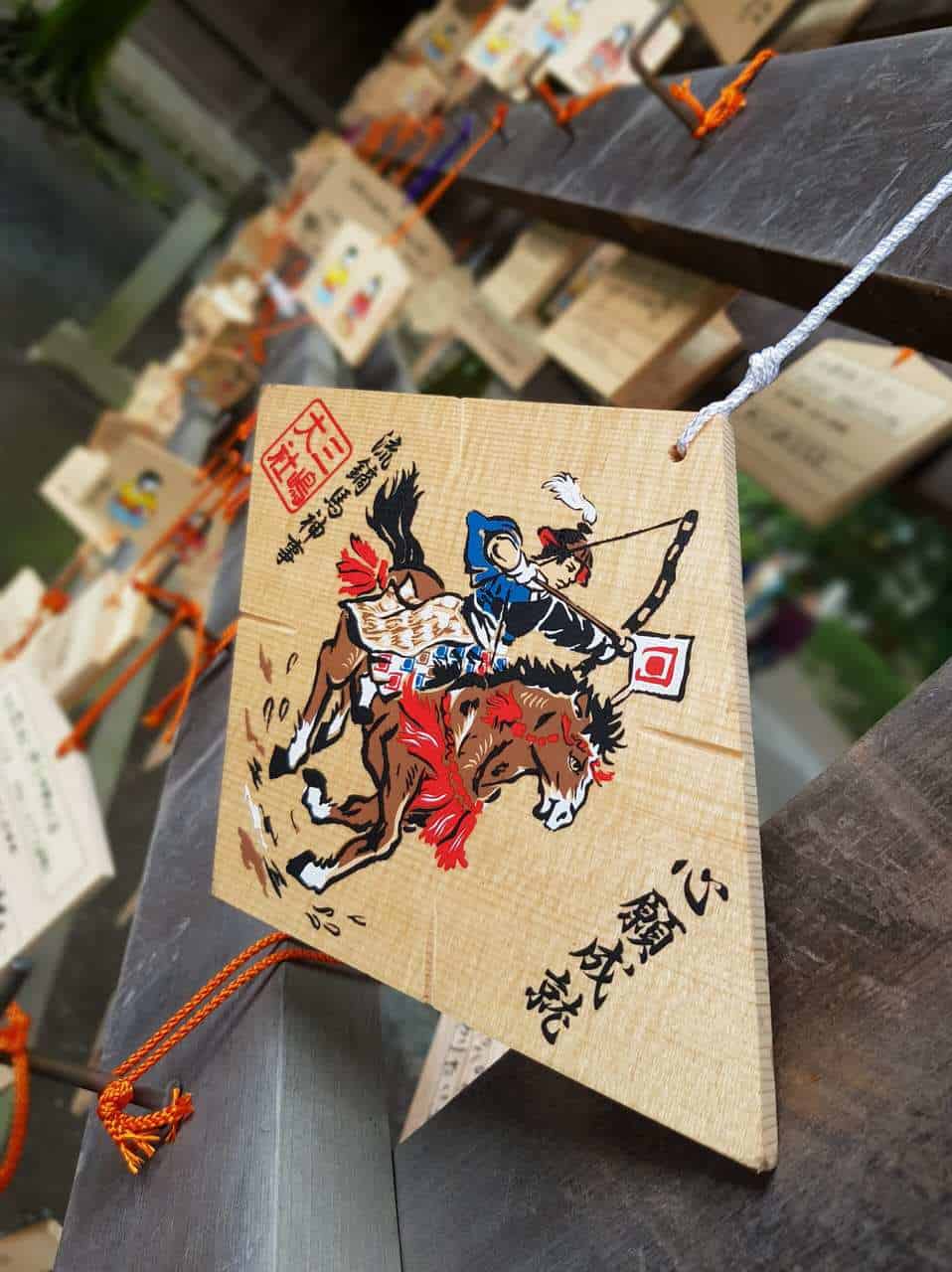 Horses in Japan: From Divine Companions to Cult Objects

Us horse lovers all have something in common. Even on vacation in a foreign country, we feel we can’t survive without sitting high up in the saddle of a horse or at least caressing the soft nostrils of our loyal companions. So then, even in Japan, the question arises: where can we find horses in Japan?

Although horses play an important role in Shintoism and horse races are very popular in Japan, horses are rare in Japan. The first indications of domesticated horses in Japan date back to the 5th century during the Kofun Era (300 to 538 AD). These horses’ origins can be traced to the Mongolian mainland and entered Japan via the Korean peninsula.

Today, I would like to trace the history of horses in Japan, their religious significance, and the first horse races in the 11th century. Find out where a unique horseback riding experience awaits you.

The Divine Horse in Japan: Where to Find Horses in Shintoism

From time immemorial, horses had a special meaning in Shintoism. They are the animals that transport the souls of the deceased back to this world during Obon season (“soul horse,” shōryō-uma 精霊馬). Furthermore, the sun goddess Amaterasu (天照) rides on them, which is why they are also called “sacred horse” (shinme, 神馬) and wooden plaques called Ema (“horse picture,” 絵馬), where you can write your wishes to deities, can be traced back to the animal.

As you can see, Shintoism and horses as sacred animals and means of transport for the deities, are indispensably interwoven. Typically, horses’ images and statues can be found at Shinto shrines, and in a few exceptions, even the living animals. The best example for a living horse on the grounds of a Shinto shrine is the Kanda Myōjin Shrine (神田明神). Located in Tokyo’s heart, the sacred pony Akari, who is supposed to transport deities, lives on the shrine grounds.

Ema: The Wooden Pictures of the Sacred Horses

Unsurprisingly, to keep a pony or horse at a shrine is not only very difficult, but it is also quite expensive. For this reason, the images and statues of horses were found on shrine grounds in the early times of the Nara era (Nara jidai, 奈良時代), from 710 to 794 AD. Around the Kamakura era (Kamakura jidai, 鎌倉時代, 1185-1333), the Buddhist tradition of wooden plaques called Ema was established.

The Kanji for ema is written on these wood plaques, with “picture” 絵 (‘e’) and “horse” 馬 (‘uma’). Nowadays, horses, along with the animals of the Chinese zodiac signs, are depicted on the Ema, and often feature unique motifs that represent the shrine.

Ao no Uma: The White Horse on New Years in Japan

It goes without saying that horses in Japan are also part of religious events. One of the most famous is the “Shinto ritual of the White Horse” (ao uma shinji, 白馬神事) at Sumiyoshi Taisha Shrine (住吉大社) in the Sumiyoshi district of Osaka. The kanji characters imply a white horse (hakuba 白馬). However, the characters can also be pronounced as ao, meaning blue, and can mean lustrous blue or black horse. In the belief of Shintoism, a black horse embodies storms and natural disasters.

Every year on January 7th, the seventh day of the year, the sacred horse of Sumiyoshi Taisha visits the main buildings of the shrine before doing its laps on the shrine ground. It is said that those who see a white horse during the New Year celebrations will be spared sickness and receive happiness in the New Year.

Where Can I Find Events with Horses in Japan?

You will not only find horses or their images at shrines—the perfect opportunity for horse fans to experience the animals at close range is through the various events that feature the elegant animals. Below you can find a selection of three of the most famous horse-related events that are a must-see for horse lovers.

Every second Saturday in June, 100 farmers’ horses walk the streets of Morioka City, the administrative center of Iwate Prefecture. The horses are dressed in colourful costumes and draped with bells, and head from Onikoshisozen Shrine to Morioka Hachimangu Shrine  (盛岡八幡宮). The name Chagu Chagu Umakko (チャグチャグ馬コ) is derived from the sound of the clattering hooves on stones (chagu chagu, チャグチャグ) and the horse’s nickname umakko (馬コ).

This custom came from the love for horses in Iwate Prefecture, also known for its horse breeding. About 200 years ago, farmers wanted to give their horses a day off from the rice harvest. So, they brought them to the Onikoshisozen Shrine, which is dedicated to the deity of horses. The farmers prayed for the health of their animals.

2) The Nikko Toshogu Reitaisai Festival and the 1,000 Samurai and their Horses

Horses were the loyal companions to the samurai. Twice a year in spring and autumn, the Nikko Toshogu Reitaisai Festival (日光東照宮例大祭) of Nikko of Tochigi Prefecture shows a reenactment of a procession from the Edo period (1603 – 1868) and held in honour of the daimyō (feudal lord) that once held domain here.

The highlight of this festival is the procession of 1,000 samurai, also called Hyakumono-zoroi Sennin Musha Gyoretsu (百物揃千人武者行列). This procession’s origin is related to Tokugawa Ieyasu, the first shogun of Edo period Japan, and his death. It was believed that his soul became a deity, and since then, hundreds of people walk the procession to accompany Tokugawa’s soul to the Toshogu Shrine.

As part of the samurai culture, Yabusame-Shinji (流鏑馬神事), archery from horseback, is also practiced during this festival.

Horses in Japan are not only regarded as sacred animals or served as companions for the samurai. They are also used in sport, such as Japanese polo (played on horseback between two teams who use mallets to drive a ball into a goal), called Kiba Dakyu (騎馬打毬). Kiba Dakyu Polo developed around 1827 when the daimyō Nobumasa Nanbu wanted to improve the horse riding skills of his army.

You can attend a Kiba Dakyu Polo game during the Hachinohe Sansha Taisai Festival (八戸三社大祭) in April in Hachinohe City in Aomori Prefecture.

Where Can I See Horse Racing in Japan?

Do you know about a “secret” passion many Japanese people have? No? Then it is now time to tell you: Every year, up to 18,000 horse races, including smaller races, take place on more than 20 racetracks in Japan – a turnover not exceeded by any other country in this world. To make a long story short: horse racing is one of the most popular sports in the land of the rising sun.

It is said that modern-day horse races in Japan have their origins in the Kamo Kurabeuma (賀茂競馬), a ritual that takes place annually at the Kamigamo Shrine (Kamigamo jinja 上賀茂神社) in northern Kyoto. The first took place in 1093 and included two horses who raced each other with one at a decided length ahead of the other. The winner is decided based on whether the distance between the two horses became longer or shorter at the end of the race.

If you want to see this traditional horse race with your own eyes, May 5th is when the race traditionally takes place at the Kamigamo Shrine in Kyoto. The event is divided into three parts: a morning ritual, followed by prayers for the safety and success of the riders before the race finally takes place.

Where to Go Horse Riding in Japan?

I don’t want to keep you on tenterhooks for any longer: here’s where you can go horse riding in Japan. Keeping horses in Japan is very expensive, so the prices for horse riding tours can be very high. Some cheaper or free options include guided pony rides on small farms or riding clubs, such as the Tokyo Riding Club in Shibuya (only for children) or on the racecourse in Fuchu that typically include a one to two-laps guided ride.

Of course, there are also real opportunities for horse riding in Japan. Whether in the Aso volcanic region in Kumamoto Prefecture on Kyushu, in southern Chiba in Tateyama City or on Miura Kaigan Beach in Kanagawa Prefecture, there are many options you can find with a quick Google search.

Whether you are going for a ride on the beach, through the mountains or with a companion, the prices can vary greatly. Costs from 15,000 to 23,000 Yen (approx. 142 USD to 220 USD) are not uncommon. And don’t worry if you’ve never ridden a horse before. Most of the options are tailored to inexperienced riders or those with no prior experience.

Discover Your Passion for Horses in Japan

Whether it’s a horse as a religious cult object, featured in an event as a faithful companion of the samurai, or you’re looking for a ride through the fascinating landscape of Japan: You will encounter horses in Japan more often than you’d think. No matter which variant you choose, for us horse lovers, it is clear that every horse is divine, isn’t it?