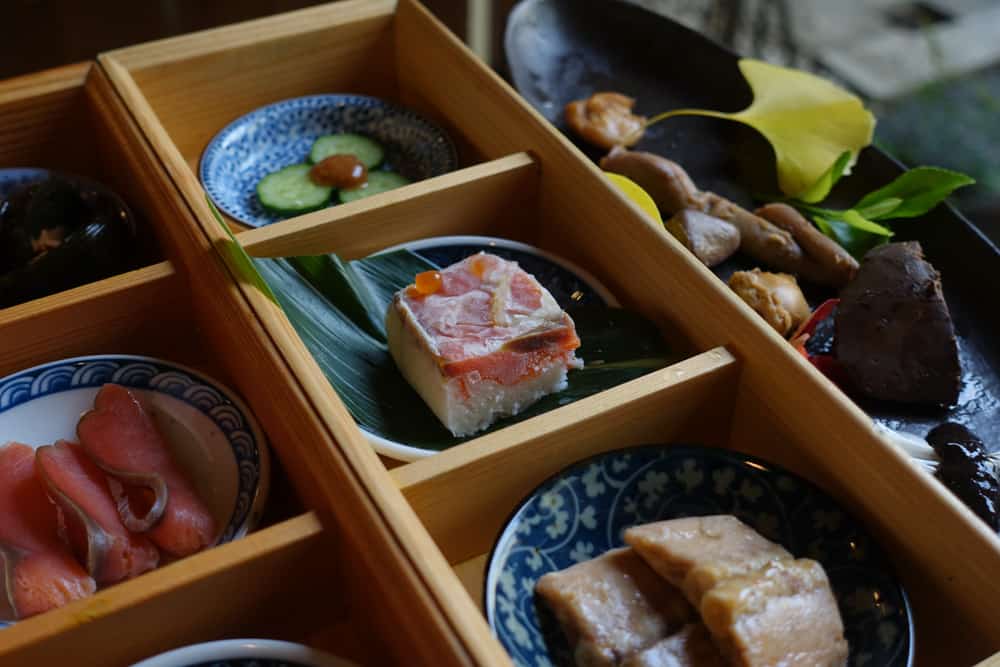 The Salmon Heritage of Murakami City

During the last day of my travels in Murakami City, I went to see the annual salmon harvest taking place on the Miomote River that runs through the middle part of this city.

Shiobiki Salmon are an icon of this city and much of Murakami’s prosperity can be traced back to the close relationship that people had with these salmon. These fish were so important to the people here that many people referred to the people of Murakami as “the children of the salmon.”

The coastal regions of the Sea of Japan are a major global site for salmon spawning and each year over 30,000 salmon return to Miomote River after spending years out at sea.

The salmon return to this river to carry out the last stage of their lives, to reproduce before dying in their river of birth. This process is an extremely fragile natural phenomenon and there are very strict restrictions on the harvesting of these salmon.

Upon arriving at the river, I quickly realized that I was not actually allowed to approach the shoreline and there were clear warning signs forbidding the general public from catching any of the salmon.

Instead, Murakami issues a limited number of special fishing licenses for 5,000 yen each that fishermen across Japan reserve up to a year in advance.

These licenses bring in over $150,000 in revenue to Murakami each year that they, in turn, use to ensure the continued health of the Shiobiki Salmon population.

If you want to know more about fishing Salmons without rods, visit this article on our website.

Driving along the river, I saw multiple hatcheries like the one pictured above. Here, millions of salmon eggs are fertilized and raised before being released back into the Miomote River. This method greatly increases the rate of survival among these salmon and is what allows them to be commercially harvested while still maintaining their populations. Even so, only a tiny fraction of these salmon survive their arduous lives at sea. Each year over eight million salmon are released into the river, but only 30,000 return in 2018.

Although I couldn’t get a good look at the salmon being caught in the rivers, I was able to see some in a store located right next to the river.

Here there were massive salmon on sale for incredibly low prices. I saw some salmon for as low as 400 yen ($4)! They also sold large cartons of fresh salmon roe for 2,000 yen ($20). Rock bottom prices for what many would argue is the highest grade of salmon in Japan.

Near the fishing area and small fish market, there is a large parking lot that you can also park your car in.

While talking to the fishermen in the shop, I was surprised to learn that Murakami City was actually the first city in the world where salmon propagation took place back in the 1700s.

They recommended I visit the nearby Iyoboya Kaikan Salmon Museum to learn more. Normally I’m not one for museums, but the Iyoboya Kaikan had a unique exhibit that I knew I had to see.

A short drive away I arrived at this large museum that was built directly into the Miomote River.

This facility had multiple theaters educating people both on the historical and current importance that the salmon of Murakami have to the people here. This museum also had a large number of live displays that showed how salmon are propagated in the hatcheries.

The most unique display of this museum was a long room with windows that had an underwater view of the Miomote River itself. Here I could see some of the salmon spawning in the river in their natural environment!

The Iyoboya Kaikan also had the information on the origins of its salmon propagation that I was looking for. This system was actually developed by a samurai named Buheiji Aoto who is said to be the first person in the world who discovered that salmon returned to their place of birth and pioneered the idea of protecting this fragile natural miracle.

The city of Murakami almost brought itself to ruin by overfishing these salmon and Aoto worked to enforce strict rules regulating their harvest. He also constructed sub-streams that were specifically made for salmon to breed and worked extensively with local fishermen to help them see the value in regulating their industry for the betterment of their entire community.

Salmon populations made a comeback thanks to Aoto’s efforts and the revenue from this industry is what allowed Murakami to fund the construction of schools and other educational programs to the children of Murakami.

Thousands of Hanging Salmon at Kikkawa

Finishing my visit to the Iyoboyakaikan, I then traveled into the downtown area of Murakami City where I visited Kikkawa, a traditional salmon shop that has thousands of salmon hanging to dry.

At this shop, you can observe the drying process of “Sake-no-sakabitashi (salmon soaked in Japanese sake)”, which is made by drying shiobiki salmon for about three weeks and then preserving it for six to twelve months.

The salmon here are hung by their tails and do not have their bellies cut completely open out of respect for the fish themselves. It is believed that hanging them by their heads would look like a noose, and cutting their stomachs wide open would be akin to the ritualistic suicide of seppuku by criminals.

The Salmon Cuisine of Murakami

Following my visit to Kikkawa, I visited their other building a few blocks down the road. This was their restaurant called Izutsu-ya, a traditional restaurant that specializes in over 100 different types of traditional salmon cuisine.

After learning so much about the incredible cultural heritage of the salmon industry here in Murakami, I am ashamed to admit that some of the first courses of my lunch were a bit difficult for me to eat.

Murakami sees heavy snow in the winter and fermented cuisine played a crucial role in the survival of the people here.

Some of these fermented appetizers included various organs of the salmon which were very new to me. There was also dried salmon that was actually quite delicious.

The main course of my lunch was a culinary delight.

There were a dozen different dishes served including salmon roe, grilled salmon, and even fermented salmon sushi.

The rice of this sushi was sweet like amazake and the fish was very tender with strong flavors. There were also cured salmon slices and even salmon liver that had been fermented for 5 years served in this course.

This restaurant also had a very helpful English menu that helped me understand both what I was eating and the extensive preparation that went into each and every dish.

There was such a wonderful variety of colors, flavors, and textures served in this meal and it was the perfect way to cap off a day exploring Murakami’s rich salmon history and culinary arts. I must say however that I have only scratched the surface of all there is to discover in Murakami City and will make it a point to return here again with more time to explore all that this region has to offer.

From Tokyo to Niigata, you can take the Joetsu Shinkansen. From Niigata, you can get to Murakami Station by the JR Uetsu Line. The entire trip takes about 3 hours and 50 minutes. In these sections, you can use the JR Pass.

You can also find information on the region on the Murakami City Tourism Association.