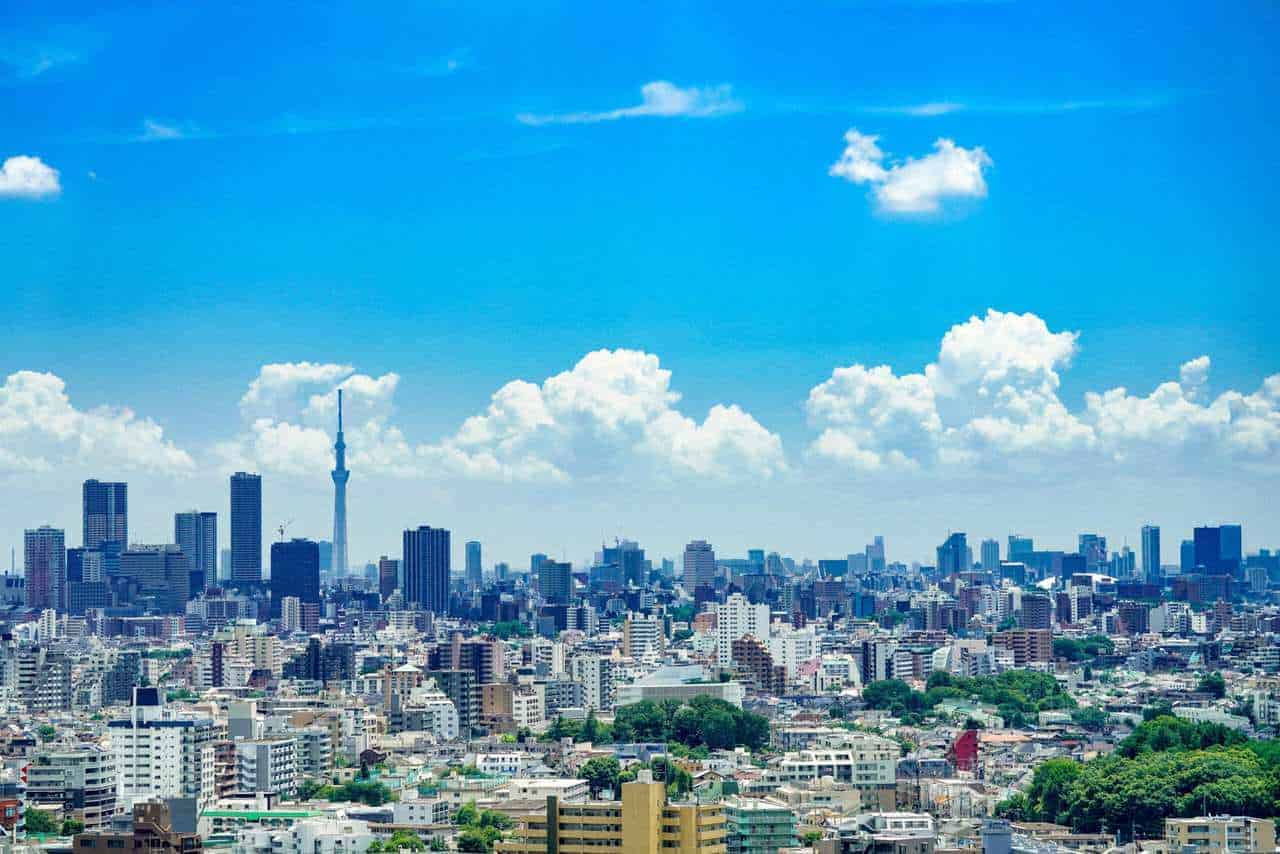 By Maria PeñascalOctober 20, 2022No Comments

Spain – Madrid, France – Paris, United Kingdom – London… How about the capital of Japan? While many may know about Nara, Kyoto, and Tokyo as Japan’s famous capitals, only a few realize that debate continues among historians about what were the official capitals. Here, we go into Japan’s current capital, the history of past ancient capitals, and some that are still debated. Here we go!

From the Yamato Period to Modern-Day Tokyo: The Evolution of Japan’s Capitals

Before the arrival of Emperor Kammu (桓武天皇, Kanmu-tennō, 737 CE – 806 CE), there was no permanent capital of Japan, with the Imperial court changing residence each time a new emperor ascended the throne. This resulted in Japan developing several major cities within the Kinki region (近畿地方, Kinki Chiho), now modern-day Kansai.

There are many possible reasons for this phenomenon, including lineage and descent issues, bureaucratic changes, or social relations within the country. Another theory is religious reasons. For example, if the previous emperor died, the Shinto belief necessitates the need to purify the place where a deceased dies. Also, if the death of an emperor left unresolved issues, his spirit could return to a yurei ghost state to settle them.

The Yamato Period: Consolidation of Japan as a State and the Rise of its First Capitals

The consolidation of Japan as a state is an unresolved debate and subject of research. One popular theory is that during Japan’s prehistory during the Jomon (縄文, dated between c. 14,000–300 BCE) and Yayoi (弥生時代, dated between 300 BCE–250 CE) periods, the inhabitants of the Japanese islands organized themselves into uji (氏), Japanese clans and kin groups. One of them, the Yamato, became the most powerful, eventually laying the foundations of the Yamato Period (大和時代, Yamato-jidai, dated between 250–710 CE) and the Yamato Province, now modern-day Nara Prefecture. Within this ancient province was Asuka city, the predecessor to Japan’s first known capital of Nara.

The Asuka Period: The Founding City of Japan’s First Capital

The Asuka period (593 CE to 710 CE) was of great importance in Japan’s history, considered one of the major turning points when Japan was shaped through many cultural reforms influenced by China. Today, visitors can visit Asuka village for its fine archaeological finds in their kofun burial sites. These massive burial sites, like Osaka’s kofun burial grounds, offer a fascinating glimpse into ancient Japan. Wado coins, believed to be some of the oldest coins in Japan, were also found in Asuka and home to the oldest temple in Japan.

While for many historians, Nara is considered Japan’s first capital of Japan, the rise of the Yamato Province, and its newly-appointed court expansion have led others to believe that Asuka was the first capital of Japan. Debates aside, Asuka remains one of the most fascinating glimpses of Japan’s ancient civilization.

The Nara Period: The First “Official” Capital of Japan

While there are still debates on which is Japan’s first capital city, most historians believe that Nara, known as Heijo-kyo (平城 京) at the time, became the first official capital of Japan, from 710 to 794.

During the Nara period, there were some infamous changes and improvements. Emperors became absolute leaders, the creation of Japan’s codes of law called the ritsuryo (律令 — civil codes of the Nara and Heian period), and the growth of Buddhism as one of Japan’s major religions. Heijo-kyo city was designed according to the Chinese cities’ style, consisting of four major streets where the emperor’s palace faced the North Star. At the end of the 8th century, Nara had about 200,000 inhabitants. Some emperors even gave more authority to Buddhism than Shintoism, as seen in Nara’s famous Todaiji built by pro-Buddhist Emperor Shomu.

When Emperor Kammu ascended the throne in 781 AD, he ordered that the capital be moved from Nara to Nagaoka-kyo (長岡京 — Osaka). However, before the capital of Nagaoka-kyo was completed, Emperor Kammu once again ordered a change to be officially moved to Heian-kyo (平安京), a flatland surrounded by mountains. This would become modern-day Kyoto.

Kyoto: The Longest-Running Capital of Japan

Several explanations justify the shift to the new capital of Kyoto. It could have been the separation of Buddhism from the court. Or that Kyoto was located in a better location, more advantageous to maintain and gain control over the country. Another reason is that they were following the Chinese Onmyodo laws, which state that the imperial palace must be in a flat area. Some historians even argue that Kyoto was the first Japanese capital, and they consider the previous cities just important settlements for the Japanese Imperial court.

Thus, ancient Heian-kyo, or Kyoto, became the Japanese capital in 794, marking the longest reign of Japan’s capital city for over 1,000 years until the Meiji Restoration of 1868. Kyoto was Japan’s epicenter for many centuries, housed political, cultural, and social powers, and was the only major city in the country until the end of the 16th century.

How Kyoto Evolved During its Reign as Capital of Japan

Over the years, this city had significant changes in its structure. In its early days, Kyoto was a court-centered imperial city, and it was distributed following the surrounding natural elements: the Kamo River in the east, Lake Ogura in the south, and Mount Funa to the north. Kyoto was also based on Chang’an’s Chinese city style, like Nara. The imperial palace was in the north, and its adjoining neighborhoods were divided into Ukyo (to the east) and Sakyo (to the west). Between them was a great avenue, Suzaku-oji.

During the Kamakura period (1185–1392), the new military government moved to Kamakura city, while the court remained in Kyoto. In addition to all the wars and natural disasters, this change caused Kyoto to undergo structural modifications, both architecturally and organizationally. The imperial capital of Japan became a medieval Japanese city, giving rise to the new powerful classes: the aristocracy, military, and religious institutions. During those centuries, they developed commerce and handicrafts, increasing their production and demand.

As we previously mentioned, during the Kamakura period, the Japanese capital was split in two. On one hand, there was the imperial capital in Kyoto, where the emperor and his court lived. But on the other hand, a new military capital was created in Kamakura, where the shogun lived.

Unlike the military government, which moved to various locations over the years, Kyoto remained the imperial capital until the Meiji Restoration. Kyoto preserves different architectural styles because it was not bombed during the Second World War. If you visit the city, you can observe the evolution of these styles for yourself.

During the Edo period (1603-1868), the Tokugawa shogunate moved to Edo city, now modern-day Tokyo. The cities of Edo and Osaka were increasing in size, catching up to the likes of Kyoto. At the beginning of the Meiji Restoration (1868), the court moved to Edo, and the two leading powers were again united in a single city. Edo was renamed Tokyo (東京 — the capital of the east). Unlike Kyoto, Tokyo had a harbor and was close to Yokohama, one of the busiest ports in Japan at that time, making Tokyo the ideal location for Japan’s newest capital. Edo Castle would also eventually become the Imperial Palace.

Nowadays, Tokyo is one of the largest capitals in the world. Initially, Tokyo was a small town along the Sumida River, a fertile area ideal for farming and fishing. But in less than 200 years, it has become one of the most populated metropolises in the world, with more than 14 million inhabitants.

How Did Tokyo Grow So Fast?

The final question is: how did Tokyo, the new capital of Japan, grow so fast in less than 200 years? The reasons are various. One of them was their need to modernize the country after being closed off from the rest of the world until its opening after the Meiji Restoration.

After opening the borders, Japan realized it needed modernization to be as strong as the powerful western countries. So, after borrowing the best of each country, the Japanese government improved its infrastructure, system, and capital, Tokyo.

Another reason is that after some of Japan’s natural disasters, such as the Great 1923 Kanto earthquake, and the bombings of the Second World War, many Tokyo areas had to be rebuilt. After World War II, Japan had an economic boom, resulting in the growth in population and integration into the capitalist system.

While there is still some debate over what the ancient capitals of Japan are, one thing doesn’t need to be debated: Japan is a country rich with cultural and historical attractions, each with its unique selling points to appeal to your sensibilities and tastes. Wherever your interests lie, we’re confident that any of these ancient capitals, bursting with life from their past and future, have fascinating discoveries awaiting you.